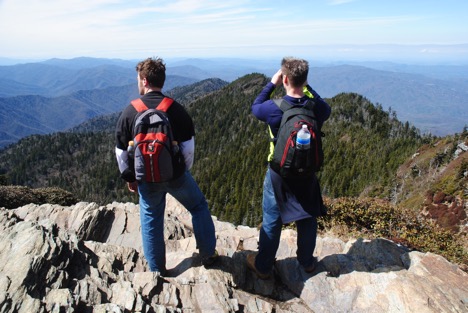 As a teenager, I talked about all the things I wanted to and all the places I wanted to go, but I couldn’t seem to get out of my friends’ basements, garages and barns. I quit using all substances at the age of 19 in the winter of 1995. In the fall of 1997, I enrolled at Rutgers and was desperate to both get a strong education and have a fun series of college experiences.

Like a lot of other students I knew, I worked during the spring break of 1998. The following month, a high school buddy of mine who would be graduating from Boston College soon swung by New Brunswick. He and two of his friends asked me to go to Florida with them – I threw caution to the wind, blew off a week of classes, and we took for warmer weather around 11:30 pm in my 1991 Toyota Corolla station wagon. We spent time visiting fireworks stores and other sites along the way, hung out on the beach and ate a number of stomach-churning meals (Waffle House was a staple). They went to bars, I went to recovery meetings, and I always ended up as the designated driver. It was fun and I was never tempted, but there was a lot of chaos (this is my story, not advice). When we arrived in Panama City, Florida, I was horrified to find a club with a pool that gave away free beer but charged $1.50 for soda or water (I regret to this day that I didn’t take a picture of that sign). We eventually made it home without any problems, my classes all went well and all three Boston College boys graduated in May. I returned to Florida again this year for spring break with a student from the Rutgers Recovery House and a friend of mine who was a regular college student. We drove 23 hours straight to Key Largo and slept on a buddy’s boat. The next morning, we left for Tampa. We stopped along the way for a recovery meeting and also to take pictures of alligators on the side of the road.  We stayed three days in Tampa, taking in spring training baseball games, conserving money by eating the early bird specials with people 60 years older than us, betting on a few dog races, and checking out the local recovery scene.

We made our way to Panama City for the final few days of our break. After an interesting chain of events, one of my friends (who had drank a few beers) was arrested. He received a summons to appear at Spring Break Court the next morning at 8 am. I took him there – the bailiff said that only people that were charged could go into the court room, but I somehow talked him into letting me sit in. There were over 100 people that had been arrested for a variety of offenses the night before. All were given three options: (a) plead not guilty and return in one month; (b) pay a $500 fine; or (c) spend 8 hours performing community service around town that day. Almost all of them chose option C. My friend had to wear an orange jump suit for the day and pick up trash. I went to a noon recovery meeting and talked about my experience and one lady said, “We love spring break court.” The rest of the trip was uneventful. That was the first and only time that my friend got in trouble – 17 years later he is a highly decorated law enforcement officer. I organized a spring break trip to New Orleans. There were 5 of us – two in recovery and three “Earth people” (people not in recovery). We stayed at a hotel in the 5th ward that used to be an orphanage. We went on graveyard and swamp tours, held baby alligators, and ate copious amounts of po’boys and gumbo. In New Orleans, I fell in love with jazz and pecan pie. Two of us spoke at a detox, and I was bothered by the level of poverty that I encountered in meetings. On the way home, I convinced my friends to drive several hours out of the way so I could visit Vicksburg, the site of US Grant’s great victory on July 4, 1863. After we got back, all three Earth people said it was their most interesting and productive spring break ever. In 2009, I was hired to oversee the Rutgers Recovery House. My major goals were to increase the level of academic performance and encourage the students to have fun. I took 14 students to Sarasota, Florida for a five days in March of 2010. Half the students stayed in one of the Recovery House resident’s condo, while myself and the others set up in a nearby hotel.  The students engaged in service work every day. Ten students went to an Alternative High School in Sarasota and spoke at a schoolwide assembly about their history of drug and alcohol problems, how they got sober, and what their life is like today. All of them took turns speaking at local Intensive Outpatient Programs (IOPs): some to young adults, some to teens, and a few spoke to parent groups.

Students spent the rest of the time going to recovery meetings, reading, doing schoolwork (a little), watching television, lounging on the beach, and bonding with each other. I took five students to a midnight recovery meeting and four students to a Spring Training Yankee game. One of the biggest problems that college students in recovery report is that they feel a stigma – they feel different than “regular kids” because they don’t drink, don’t go to parties, and live in separate housing (which they like, but some of them still feel different). The idea of a recovery spring break was hatched in an effort to normalize their lives and to show that they could have fun and go on spring break without drinking or drugging. When we returned, our students reported that they really enjoyed the service work and that many of them engaged in more service work after they’d returned, including at other treatment programs and homeless shelters.

Nine students, an alumnus, and a semi-professional hiking guide accompanied me on an eleven hour drive from NJ to Gatlinburg, Tennessee very early in the morning on March 18, 2014. We only stopped for gas and coffee, except for when we ate at places recommended by the Food Network app on our smart phones.

We stayed in a 6-room cabin in the town of Gatlinburg, just outside of The Smoky Mountains National Park. Students attended an AA meeting while I gathered supplies. A couple of students went horseback riding in the late afternoon while a few others took a very short warm-up hike.

Our first evening was spent making sandwiches, filling our camelbacks with water, and generally preparing for a 17-mile hike the following day. Some students played pool in the basement, others played board games, and a couple of us read into the late evening.

I woke students up at 6 am – one student had risen a little earlier and prepared a huge breakfast of eggs, bacon and coffee (I purchased eight dozen eggs). We were out of the door by 7:30 and on the trail by 9. We hiked up the Leconte Trail, one of the 10 most beautiful hikes in America as rated by National Geographic. I encouraged students to stretch and constantly drink water. The park offered numerous views of the mountains while winding through forests and along steep cliffs. Students continually expressed their wonder at the natural beauty and a few of them engaged in mindful meditation while walking.

About six miles into the hike, we crossed a series of treacherous icy patches. Students paired up and helped each other across – most used 3 or 4-points of contact on the ice. We reached the summit around 1 pm and ate lunch. Numerous students expressed their wonder and gratitude. We hiked back down a different trail past waterfalls, hanging rocks, through natural caves, and over huge boulders. We arrived at the bottom of the trail just before dusk; everyone was completely exhausted and many had a few blisters. We cooked burgers and ribs when we got back to the cabin. Most people were asleep by 8 pm.

Only three people decided to take another 16 mile hike the next day. We climbed Klingman’s Dome, one of the highest points east of the Mississippi and the highest point on the 2,150 mile Appalachian Trail. The view at the top was spectacular. We ate lunch and then began the long walk back to our cars. The other group took a shorter (5 mile) hike to Rainbow Falls.

That evening, we went to English Mountain Recovery, a non-profit rehab center at the edge of the Smoky Mountains. Our female students talked to the female clients in group while our male students told their stories to the men’s group. It was an excellent outreach event. Several weeks later, half the students organized their own weekend hiking trip. I was overjoyed.

A few of the students from that trip graduated in 2014 or 2015, and they all said it was one of the highlights of their college experience. For the last five years, I have taught classes at both the Rutgers School of Social Work and School of Communication. This spring, I am teaching three classes. My final class before break ended at 11:10 on Wednesday morning. Six hours later, I was on a plane to Paris.

Back in 2000, I came back from England raving about London. I was enchanted by its gardens, the statues, the Indian food, the history, and how I could see a different Shakespeare play every day. My father responded, “One day you will feel that strongly about Paris.”

I’m finishing up this article at 2 am in a 6th floor Parisian apartment that is three blocks from where Ernest Hemingway lived and wrote in the early 1920’s. I bought a copy of A Moveable Feast at the Shakespeare and Company bookstore, a wonderful shop that was featured in Before Midnight (the owner’s father knew Hemingway and also published James Joyce’s Ulysses). This trip is my early 40thbirthday gift to myself. It’s a pilgrimage to see Notre Dame, the Tower, the Arc, Versailles, and as many Monet paintings as I can find. After getting off the plane at 8 am (2 am EST), I cleared customs and took a train to Paris and hauled my 65 pound bag to my apartment. Then I grabbed a double espresso and a croissant and walked three miles to an English speaking recovery meeting. On the walk back, I passed stunning site after stunning site.

I have to tell you, these spring breaks just keep getting better. Does Mr. Greenagel still organize trips for college students in recovery? It would be awesome to go on one of his cultural/hiking expeditions.